CARSTAR Momentum 2018 Leaves Everyone Emotional After Raising Over $230,000 for the Fight against Cystic Fibrosis 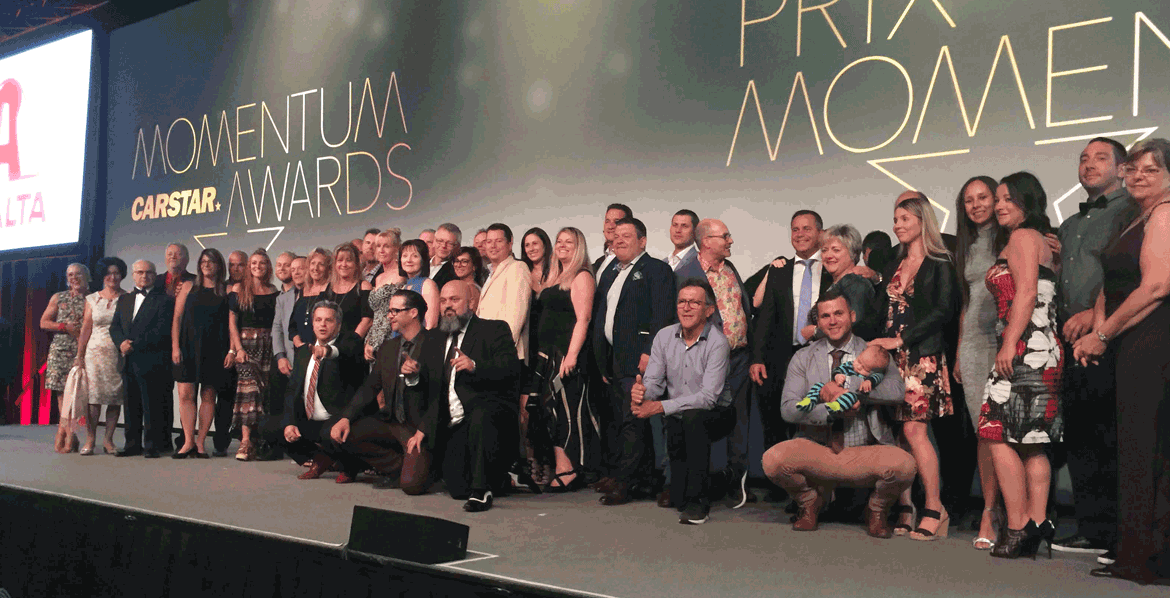 CARSTAR franchise partners, vendors and insurance leaders from both the U.S. and Canada came together this week at the annual North American conference and raised an astonishing $230,000 for cystic fibrosis research, care and advocacy.

Throughout the Momentum 2018 CARSTAR conference, attendees had various opportunities to donate to its charitable cause. Proceeds raised from selling CARSTAR branded socks, participating in the “Walk the Line” charity walk and bids on the silent auction all went towards fighting cystic fibrosis (CF). However, nobody was expecting the uncontrollable generosity for the final night at the CARSTAR Dinner and Awards Gala. Franchise partners mobilized, almost instantly, with a colossal showing of generosity raising $200,000 in that room alone.

“I have never been more proud to be a part of the CARSTAR family and to be working for this outstanding network of franchise partners,” said Michael Macaluso, President, CARSTAR, shown at podium above. “All we said was, ‘You can ring a bell if you donate $500’. Almost instantly, the whole room began working together to collect funds, lined up to donate on the spot or feverishly bid on the silent auction items. I was moved by the heartfelt generosity – it was an emotional evening for everyone in that room and is something that I will never forget.”

Peter Chavez from the LC Group was first in line to donate with a $1,000 contribution that they eventually tripled later in the evening. CARSTAR Red Deer was next in line with a $1,000 donation, which was on top of the donated $2,000 prize money from Wednesday’s Shine Month Award. After that, donations came from every corner of the continent, including whole regions banning together for a partnered contribution.

Some notable donations came from:

CARSTAR Ontario locations put everyone into a state of disbelief by putting forward a colossal donation of $75,000. The Colorado Business Group closed out the fundraising frenzy with an $11,000 donation to push CARSTAR over the $200,000 threshold for the evening. This was on top of their $500 donation from Wednesday’s Shine Month Award prize money. The uncontrollable fundraising momentum ended after Dave Stretz from the CMD Group secured the priceless auction item of a painting done by 6-year-old Faith Newell, who lives with CF. Mark Kharfan from the Kharfan Group also purchased $3,000 worth of CARSTAR socks, with all proceeds going toward helping the quest to end CF.

“Going into the evening, I knew CARSTAR was passionate about our cause as I have worked with the Alberta locations on various fundraising initiatives,” said P.J. Aucoin, Cystic Fibrosis Canada volunteer. “However, that night absolutely blew me away. Sitting in my seat, stunned with emotion, I witnessed everyone at that gala flock to the front, eager to contribute. I wanted to get up on stage and express how much this enormous generosity means to not only my family, but on behalf of all families affected by CF – but I was too overcome with emotion. From the bottom of my heart, and on behalf of my 6-year-old son Nash, thank you, CARSTAR.”

The annual CARSTAR cystic fibrosis fundraising target for 2018 was $375,000. Thanks to the CARSTAR Momentum 2018 conference, the network shattered its goal. The current total for funds raised is now at $470,000 with the Colorado Business Group and Edmonton, Alberta golf tournaments still yet to happen. The passion behind this cause has never had more momentum and the CARSTAR network plans to keep it going for next year’s conference in Chicago, Illinois.

For a full recap of the entire conference, visit https://www.youtube.com/watch?v=77mSfvabYZU&t=18s